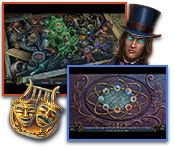 Amax Interactive brings you the next chilling adventure in the Worlds Align series! When a young woman in astral form explains that she and your comrade Dupin have been kidnapped, it's time to spring into action! But you quickly find that much more than Dupin's life is at stake. Someone's trying to break down the barriers between the Game Worlds and going after the Watchers is just the beginning. When someone's dreams can be used against them, no one's safe. Can you rescue your friends and stop a madman from destroying the worlds in time? Find out in this exhilarating Hidden-Object Puzzle adventure! This is a special Collector's Edition release full of exclusive extras you won't find in the standard version. As a bonus, Collector's Edition purchases count toward three stamps on your Monthly Game Club Punch Card! The Collector's Edition includes: