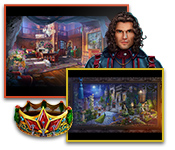 Do Games returns with the newest spell-binding addition to the Royal Legends series! It's been years since the King learned about his son's planned betrayal. Forced to exile him, the kingdom has found relative peace since. That is until His Majesty falls victim to a mysterious disease! As his magical supervisor, it's up to you to uncover if the former prince has returned to carry out his sinister plans or if the threat is coming from the court's inner circle itself! Can you use your magical expertise to save the monarch and his realm before it's too late? Find out in this riveting Hidden-Object Puzzle adventure!