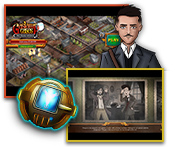 Morgan Johnson is one of London's finest police detectives, known for his determination and strict adherence to the law. But when an investigation goes terribly wrong and his partner dies, he finds himself blamed for the public's diminishing confidence in the police force. Demoted and removed from the case, Morgan is assigned a new partner: Jack Brown, a young officer notorious for his loose interpretation of the rules. Worst of all, for their first job together, they're told to find a missing dog. For Morgan, things couldn't be worse. But when the seemingly innocuous case turns up an unusual clue, Morgan and Jack find themselves on the edge of a dark conspiracy brewing in the shadows? A conspiracy that threatens London itself.