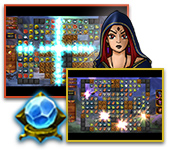 Detective Morgan Johnson and his partner Jack Brown have solved many cases that colleagues could not, but one mystery has remained unanswered - their friend Eleanor's past. While seeking these answers, Eleanor goes missing, so Morgan and Jack set out to help, but they never expected that her trail would lead them to an isolated village where dark rituals are performed! What is the secret of the village's curse and the rituals that demand human sacrifice? What is its connection to Eleanor, who has gone there in search of the truth? As Jack and Morgan delve deeper into the darkness that surrounds the strange village, they'll soon learn that Eleanor isn't the only one with something on the line!