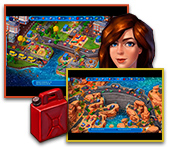 8Floor brings you an action-packed new strategy game with Emergency Crew: Volcano Eruption! The Emergency Crew leaps into action when disaster strikes Coastland! It starts with an earthquake, but things quickly go from bad to worse when it becomes clear that the earthquake was only the beginning of a series of natural disasters that could destroy the entire city! Now it's up to the Emergency Crew to step up and be the heroes that Coastland needs. It's a race against time as you undertake various missions to rescue survivors, handle looters, and work to rebuild the city in the face of earthquakes, floods, fires, even an active volcano! Do you have what it takes to be a hero? Find out today! This is a special Collector's Edition release full of exclusive extras you won't find in the standard version. As a bonus, Collector's Edition purchases count toward three stamps on your Monthly Game Club Punch Card! The Collector's Edition includes: