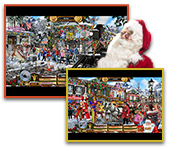 Casual Arts is back with a new installment in the series that's become a Christmas classic with Christmas Wonderland 12: Collector's Edition! The season just isn't the same without Christmas Wonderland and this year's adventure promises to be the best yet! When Santa's sleigh breaks down on Christmas Eve just as he's beginning his annual trip, everyone at the North Pole and around the world need your help to save Christmas! Help Santa, Mrs. Claus, Peter, Popsy, Momzy, and the rest of the elves as you uncover all of the seasonal secrets and surprises that await in this holly jolly Hidden Object Puzzle Adventure game! This is a special Collector's Edition release full of exclusive extras you won't find in the standard version. As a bonus, Collector's Edition purchases count toward three stamps on your Monthly Game Club Punch Card! The Collector's Edition includes: