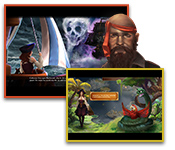 After her adventures alongside the cursed captain of the Flying Dutchman, Catherine Ragnor now has a new ship and a new quest to find treasure. Yet when she returns home after a long voyage, she finds that her village is under attack by the notorious pirate Blackbeard! Already dangerous, Blackbeard is now seemingly unstoppable due to the power of the mighty Sword of Ocean Fury. Determined to get revenge for her family and friends, Catherine sets out on a new quest to find a legendary weapon able to counter Blackbeard's sword.