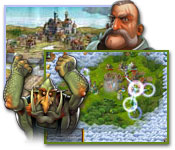 Defend your kingdom from raiders in Be a King 3: Golden Empire! Rebuild cities to their former glory, feed the poor and protect them from raids by bandits. Rule with your strong hand and raise a powerful empire. Complete different objectives and enjoy the medieval atmosphere as you experience the life of a king. Stop the evil monsters and raiders before it's too late in Be a King 3: Golden Empire!