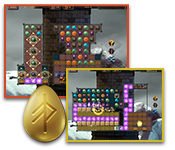 Solve the mystery and save the Vikings in this intriguing sequel to Tower of Wishes! A party of Viking raiders is forced to retreat from a losing conflict, and things go from bad to worse when the boat sinks on their way home! But just when all seems lost, they wash ashore on a strange island with a mysterious tower, disappearing into the clouds. Some of the crew believe the tower is the legendary Bifrost, the road to the realm of the gods. Others have heard whispers of an ancient tower with the power to grant the wish of those that reach the top. With no way off the island, it seems that the tower is the only choice. What will you find at the top? There's only one way to find out! This is a special Collector's Edition release full of exclusive extras you won't find in the standard version. The Collector's Edition includes: