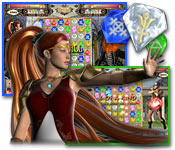 Help Athena defeat the other gods and take over the Throne of Olympus in this incredible Match 3 game! Zeus, the king of the Gods, has decided to pass the throne on to the younger gods. After careful consideration, he has finally chosen his daughter, Athena, to become his successor. Help Athena prove that she is worthy of the throne as you battle powerful Olympian Gods, mythical creatures, and claim the Throne of Olympus!