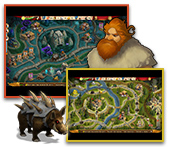 When a terrible storm overtakes a squad of brave Roman soldiers and workers on their way home from yet another military campaign, their ship crashes upon the rocky shore of a deserted island. But they quickly discover that there's more to the island than meets the eye when they find a mysterious portal hidden inside an ancient cave, where they're faced with a choice - face certain death on the island or step into the unknown. Now it's up to you to help the heroic Romans find a way home by building settlements, clearing paths, and defeating their enemies for the glory of Rome in this fast-paced Time Management game! This is a special Collector's Edition release full of exclusive extras you won't find in the standard version. As a bonus, Collector's Edition purchases count toward three stamps on your Monthly Game Club Punch Card! The Collector's Edition includes: