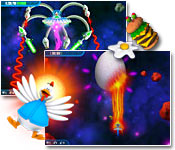 Aliens are invading from a different planet?and it turns out they're chickens! Angered by the way they've been treated on Earth by us Humans, the chickens are on a war path in Chicken Invaders 3! In this hilarious Action & Arcade game, take to your spaceship and put an end to this fowl invasion. As the old saying goes, "You can't make an omelet without cracking a few eggs?and skulls!"