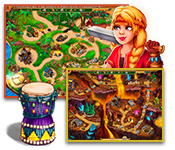 Alawar Entertainment presents the first extraordinary sequel in the popular, action-packed series, with Viking Heroes 2! No heroes are as fierce and mighty as the Vikings! Which is good news for the people of Midgard and the surrounding realms and bad news for the dark forces that threaten them! In the wake of the massive eruption of a long-dormant volcano, the Viking brothers and sisters set out on a journey through magical lands to aid those in need and seek the mysterious, destructive force behind the calamity. Come face to face with massive dinosaurs and even venture through a visually captivating dream realm as you join old friends, including the reliably unreliable Loki, to rebuild devastated villages and complete quests for a cast of colorful characters in this epic Time Management adventure! This is a special Collector's Edition release full of exclusive extras you won't find in the standard version. As a bonus, Collector's Edition purchases count toward three stamps on your Monthly Game Club Punch Card! The Collector's Edition includes: