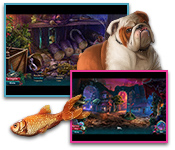 As an agent of Myth Seekers you are called to Paris to find out why the other Seekers have been acting strange. You discover that it might have something to do with a mysterious artifact found near the likely location of Ys, a mythical city swallowed by the ocean. Search the alleys of Paris to find echoes of the legendary cataclysm that wiped out an ancient civilization from the surface of Earth and make sure the ancient forces responsible for this tragedy will remain dormant. There is a shadow hanging over Paris and time is running out!