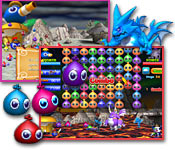 One day in the peaceful Slime World, the King of Monsters commanded his gigantic army to attack the Slimes, and forced them into slavery! Take on the role of Colonel Slime and use a powerful Slime Army to defeat the invading monsters and bring the peace back to the Slime world in this fun and exciting Match 3 game! Play through tons of levels and summon forth special Slimes with unique abilities and powers. Can you stop the evil King of Monsters?