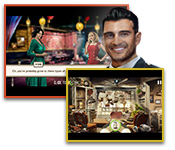 It's your chance to investigate flying saucers in the world's first Unidentified Flying (Hidden) Object Game! As a newly recruited agent, it's your job to uncover what lies behind the real declassified UFO sightings. Project Blue Book: Hidden Mysteries is based on HISTORY's hit drama series PROJECT BLUE BOOK, exploring the historical Top-Secret investigations into UFOs conducted by the U.S. Air Force between 1952 and 1969.