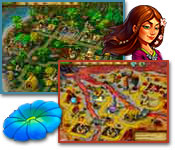 Join two heroes on one grand time management adventure! Fate has brought a clipper carrying a curious naturalist and a pioneering geologist to the enchanted island Tapa-Tui. Join Hika-Ri and Kao-Ri as they embark on an all-new journey to explore the many wonders of the island paradise and uncover the culprit behind a despicable plan to strip it of its precious resources. Mine stone and ore from the bowels of the Earth, summon crops from fertile soil and trade with merchants, all in an effort to complete missions ranging from keeping an island afloat to repairing a natural cloud maker. Smart use of relics that grant various abilities and production bonuses will ensure your success. Complete your tasks swiftly and reap dozens of awards or play the game at a leisurely place - it's up to you!