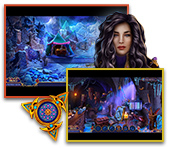 Big Fish Editor's Choice! This title was selected for its exceptional quality and overwhelmingly positive reviews from our Game Club beta testers. Domini Games is back with the latest breathtaking installment of the Enchanted Kingdom series! The King is dead! As his son, it's up to you to rule the Empire. But any plans for a coronation are quickly thwarted when a frigid foe attacks your realm! A long-lost relative is after your crown, and their dark magic threatens to take the land into an age of cold darkness. Do you have what it takes to defeat them and save your home in time? Find out in this exhilarating Hidden-Object Puzzle adventure! This is a special Collector's Edition release full of exclusive extras you won't find in the standard version. As a bonus, Collector's Edition purchases count toward three stamps on your Monthly Game Club Punch Card! The Collector's Edition includes: