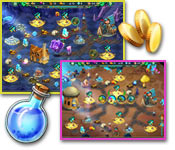 Aerin's father, the elven king, promises to marry his daughter to a winner of a tournament. This revelation shocks Aerin, but she has to obey her father's edict. Her beloved Tillian participates in the tournament to try and win Aerin's hand in marriage. Meanwhile a disaster comes to the kingdom and threatens to drown it in chaos. Help Tillian win the tournament, save the kingdom and marry Aerin!