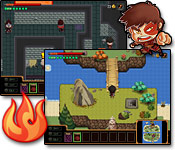 Prince Zuko has been welcomed back to the Fire Nation by his father, Fire Lord Ozai. But Zuko`s uncle Iroh has been imprisoned. Now, Lord Ozai has his eyes set on conquest. Will Zuko help his father take over the world, or will he heed the advice of his uncle and bring peace to the four nations? This is the path that Zuko must walk, but it must be you who decides where that road takes him.