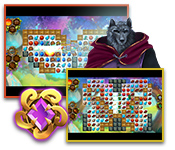 The war at the Academy of Magic caused young Raymond Deveraux to be cast through a portal and into the past. Finding himself in an era where witches and wizards are feared, his attempt to help throws him into the midst of a deadly conflict. Raymond befriends some of this era's wizards and looks for a way to bring peace to the troubled village, but the more he learns about the village's struggle, the more it seems like peace might be impossible. Buckle up and grab your wand for this epic Match-3 quest through time!